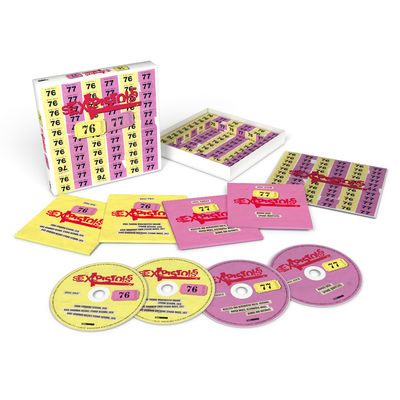 If at first you don’t succeed, try again…

Sex Pistols 76/77, features no less than 80 alternate versions of tracks recorded between May 1976 and Sept 1977 that would help form the legendary album NMTB’s. This set includes 8 previously unreleased versions and 30 tracks available for the first time digitally.

The Sex Pistols as we know them, John, Paul, Steve and Glen, got together in the summer of 1975. It would be some 10 months before they first ventured into a recording studio with Chris Spedding, on May 15th 1976 at Majestic in London. Later that July they’d record first at Decibel and then at Riverside with Dave Goodman and subsequently at Landsdown and Wessex later that October. All these early recording sessions are included here, giving listeners the opportunity to hear just how the songs and the band’s sound evolved from the start.

During this period the band signed to EMI and also undertook sessions at their Manchester Square studio. Again these recordings are included on this set.

After issuing Anarchy In The UK, the adverse publicity around it and the band’s TV appearance (in place of Queen) on Bill Grundy’s ITV show on Dec 1st 1976, EMI would drop them on Jan 6th1977. The band kept the record company advance of £40K and promptly got together again with Dave Goodman at Eden and Gooseberry studios and carried on recording. Glen would depart in February and be replaced by Sid Vicious.

They then signed to A&M on March 9th (£150K), re-staging the signing outside Buckingham Palace the following day for the press. A&M quickly began pressing the single God Save The Queen for a March 25th release. 25K units were created but on release day A&M announced they’d pulled the single and dropped the band and would destroy the records. Meanwhile the band kept £75K in compensation and recording sessions continued.

Friday the 13th…..lucky for some? On Friday May 13 they signed to Virgin records and would continue recording right up until Sept 1977, with NMTB’s being released the following month.

76/77 shows just how NMTB’s came to be. There was no luck, instead inspiration, creativity and hard graft.